History of the Shul

Our Synagogue was founded on 21st March 1904 – 5 Nissan 5664. When the late Rabbi Yudelovitch left the New Shul, Cheetham Hill Road, his followers decided to form a synagogue of their own.

Rabbi Avrohom Aharon Yudelovich was born in Novardok, Russia in 1850 and was recognised as a child prodigy.  In 1871, at the age of 21, he published his first sefer Olim L’mivehan.  He received semicha from Rabbi Yom Tov Lippman 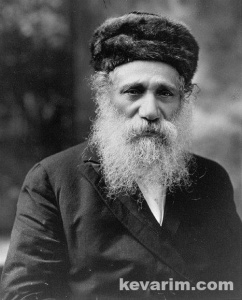 Rabbi Yudelovich was appointed Rabbi of the new Shul, Cheetham Hill Road in 1898.  When he left this Shul in 1904 he became the first Rabbi of the United Shul, based in Park Street Cheetham, which became the foundation of what is now Meade Hill Shul.

Such was the popularity of the learned Rabbi Yudelovich that this new Shul was always crowded.  It was normal for there to be a queue on the stairs leading up to the Shul, of people anxious to hear his Shabbat and Yom Tov sermons or to attend his nightly Shiurim.

In 1905 Rabbi Yudelovich became the Rov of the Broder Shul – The United Shul is a breakaway from the Broda Shul.  Then in 1908 he left for America where he took the pulpit at Sharei Tefilah in Boston.  He authored many seforim: sefer Teshuvat Beis Av on the Shulchan Aruch, the five volume work called Drash Av, and other works on drush.

Rabbi Yudelovich passed away on the 5th Shevat 5690 – 3rd February 1930 survived by his wife and children.

By 1906 it was felt that more spacious accommodation was required. It was in this year that the Cheetham Hill Road premises were acquired and the Synagogue rehoused. Those responsible for the purchase were Messrs. E. Marks, A. Baum, S. Silverstone, B. Berman and U. M. Mendelson.

In 1907 the first Executive was formed. Those elected were: President, E. Marks, Esq. ; Warden, S. 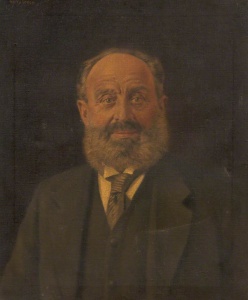 The synagogue’s first president was Ephraim Marks, brother of Marks and Spencer founder Michael Marks. The first Penny Bazaar was located in Robert Street at the top of Cheetham Hill Road.

In the years between 1907 and 1921 a flourishing Chevrah Gemmorah was formed and it was also during this period that a large collection of sepharim was amassed. These sepharim were obtained mainly by presentation — donors ranging from Rabbi Yudelovitch, himself, to the ordinary layman. This resulted in the collection of an exceptionally fine library from which many prominent Rabbanim have enhanced their knowledge.

The first chazan to officiate was Chazan Katz who went to America in 1909. He was succeeded in 1909 by the famous Chazan Siroto, who served as First Reader from then until his death in 1926 — a period of seventeen years in all.  The Chazan’s grandson. Lee Lawrence was a popular singer In the 50’s and 60’s.

In 1930, internationally renound Solomon Stern came to the United Synagogue.  Chazan Stern was a native of Czechoslovakia and as a young child he studied with Yossele Rosenblatt and sang solos in Rosenblatt’s choir in Muncaz.  As well as having a Yeshiva education, he studied music in Kharkov and the Conservatoire in Moscow.  He was appointed Chief Cantor to the Leipzig Hebrew Congegation in 1921 at the age of 27.  He made a number of world tours and in 1926 he became the Chief Cantor at the Great Synagogue of Bratislava, where is succeeded his own teacher, Rosenblatt.  The Synagogue seated over 2,500 worshipers and was regularly full to capacity.  It was after this that he came to the UK where he became the Chazan of the United Synagogue.  Three years later he left for Leeds where he remained for the rest of his career.

In 2004, one of the congregation’s oldest members was 81-year-old Leslie Isaacs, whose father Barnett Isaacs donated the chandelier above the ark In the Cheetham Hill Synagogue.  Barnett’s name is remembered on a lectern in the current Shul. Leslie was barmitzvah at the Shul in 1936. He recalls: “The voices of Chazan Stern and his sons singing in the choir is my lasting memory. The bass singer in the choir (Rothbaum) was a Hebrew teacher at the Jews’ Shul. Leslie’s elder son Anthony was one of the last boys to be barmitzvah in the old Shul. He remembers the head of the Talmud Torah. Dr IW Slotki addressing the barmitzvah. Younger son Steven was barmitzvah at Meade Hill Road. Looking back to the Shul’s glory days before the war Leslie says: “The Shul was always full. Because we were poor we sat at the back.” Because there were so many Shuls In Cheetham Hill Leslie said that it was like a “football match” after Yom Kippur as worshippers emerged from all the synagogues en-mass.

Below is photo of original Shul on Cheetham Hill Road, from the on-line photo records at Manchester Central Library. 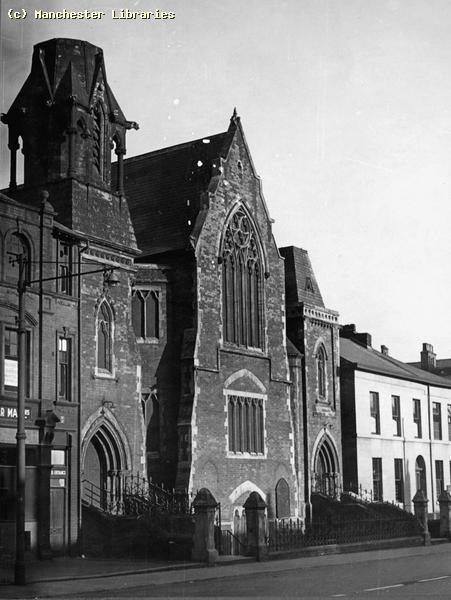 The United Synagogue’s Beth Hamedrash held 700 people and was the largest Shul hall in the city. It was popular venue for simchas and meetings. In Its heyday the synagogue was so busy that a commissionaire manned the door on yomim tovim and police were on duty to shepherd crowds across Cheetham Hill Road. On Kol Nldrei entry was by ticket only.

There is an amazing video showing the old United Synagogue Shul in 1946 for the wedding of Thelma and Danny.  You can see the video by clicking here.

The congregation was in its heyday in the 1930’s.  The great and good flocked to the Shul for the Golden Jubilee celebrations in 1954.  The minister at the time was Rev S Freedberg. who also served as a mohel.

Present at the celebrations was Rabbi Julius Unsdorfer of Holy Law Synagogue. Rov Maurice Gaguine from the nearby Spanish and Portuguese Synagogue. Rabbi S Rapaport from the Higher Crumpsall and Rabbi Louis Jacobs who wont on to establish the Masorti Movement from the Central Synagogue in Heywood Street. Dayan I Golditch and Dayan I J Weisz also attended. Civil dignitaries present wore Lord Mayor of Manchester Alderman Abraham Moss and Salford Alderman J Schlosberg,

The old synagogue was sold in 1965.  This was arranged by Mr Abrams who sold the premises on Cheetham Hill Rd and arranged the purchase of the present site on Meade Hill Road.  The site was formerly a pig farm and the farmer lowered the price as the use was to be for prayer.

Michael Rappaport remembers “My grandfather arranged the bridging loan from Mr Baker as the sale took a long time and the need for the Shul in the new neighbourhood was great.  The first Barmitzvah (Mark Perner) in the current premises was March 1969.  I was Barmitzvah in the May and had my first Aliyah on the Thursday in the old Shul, so for a short while both premises were in use.  I cannot recall if the new Shul was in use for the previous Yamin Naraim.” 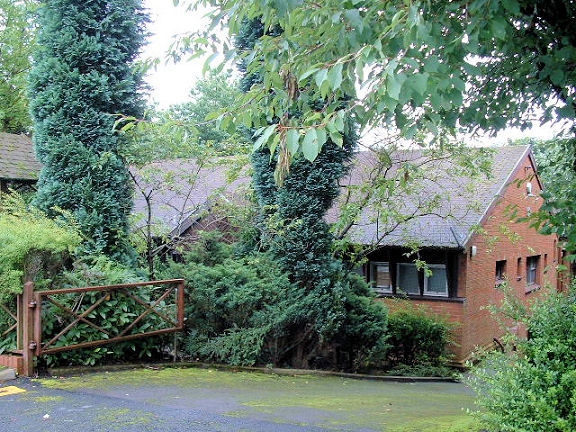 The Cheetham congregation’s last minister, and Meade Hill Road’s first, was Chazan Alexander Zyskind Mentlik.  He was born Allesandro Mentelli and hailed from Italy where he sang opera alongside Gigli, who predicted “a great future” until the war interviened.  He joined United Synagogue as chazan in 1960.  Sadly, he died at the young age of 54.  On Wednesday 20th June 1979, the Shul held a memorial service in his memory.

Chazan Shmuel Terry replaced Chazan Mentlik in 1979.  Chazan Terry studies at Carmel College before being given singing lessons from the great Beniamino Gilgi.  He remained in position for over two decades until poor health forced him to retire.  Carl Goldberg remembers “At my late parent’s golden wedding in 1994, Chazan Terry received a standing ovation from all the guests.  Everyone was delighted and spellbound with the sheer power and beauty of his singing.”

Rabbi I Freedman was the first minister at the Meade Hill Road premises and remained in office from 1965 until his death in the early 1990’s.  After a brief period without a rabbi, Rabbi Joseph Lever came to the synagogue in 1998.  Rabbi Lever continued the tradition of the Shul having renowned chazonim.  His would daven with such passion that it would bring tears to the eyes of all who listened.  His voice ranged from the deepest bass to the highest falsetto all note perfect.

When Sidney Huller first became involved In the Shul the building was a large wooden structure. He raised funds and with a loan from the late Morris Baker, which saw the building of the current synagogue.  He proudly stayed in post for 35 years until ill health meant he had to stand down in 2012. 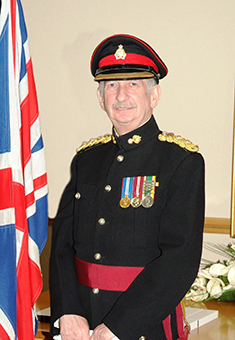 At the AGM in 2012 (the first AGM in over 20 years) a new executive was voted in headed by President Colonel Martin Newman.  Colonel Newman (shown right) was honoured with an MBE in 2018 for voluntary services.  Amongst his many other roles he was chair of the Jewish Committee for HM Forces.  Colonel Newman transformed the experiences of Jewish personnel from a small group to a thriving network within the defence faith community.  His leadership drove the reintroduction of uniformed Jewish chaplains for the first time since the 1950s, and he successfully introduced kosher ration packs

The new executive was a big change after so long under the old leadership.  They looked to bring back a little of the old glory days to what was a magnificent building and a wonderful community.  The task ahead of them was great.  What was once the largest Shul in town had been reduced to only two services per week.  Friday evenings were just managing to get enough men to make a minyan (the quorum of ten Jewish adults) and Shabbos mornings were down to 15-20 men.  Shul members were down to only 140.

With the help and advice of Dayan Berger of the Manchester Beth Din, in 2014 the Shul appointed Rabbi Yanky Prijs and Rebbetzin Esti Prijs.  They brought new vigour and excitement to the Shul.  In November 2014 the Shul became a registered charity.  Due to there being a United Synagogue already in existence the Shul had to find an alternative name.  It decided on Meade Hill Shul to reflect the Road they were on.

By 2017, as numbers started to increase the Shul started to re-introduce many services sadly lost in the past to dwindling number.  To recognise this growth, the 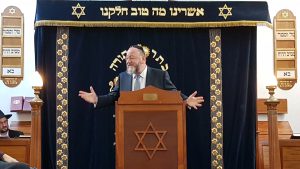 Shul was honoured to welcome Chief Rabbi Ephraim Mervis on Sunday 29th January 2017 for the official induction of Rabbi Yanky Prijs.  This was the first Chief Rabbi in 50 years to visit our Shul.  Over 150 people attended including Dayan Berger from the Beth Din, Rabbi Simmons from Stein Court, Rabbi Walker from Heaton Park and many other Rabbonim and executives from Shuls both in and around Manchester.  They were expertly entertained by our quartet of Chazonim, Martin Radnan, Simon Caplan, Alan Goodman and Menachem Leiberman.

In April 2017 the Shul was included in the Manchester Eruv.  The Greater Manchester Eruv is the largest in the UK.  It has a 13-mile perimeter constructed of garden walls, part of the Metrolink, and, in places where there is a gap, wire strung over the top of 8ft (2.4m) high poles.  The inclusion in the Eruv breathed life into the area.  The kosher butcher Vidals managed to survive in the area and was joined by Boykos deli (now Kosher City) which was made fully Kosher in early 2019.

In March 2020, due to the COVID-19 virus, the Shul made an historical decision to temporarily close it’s doors for all services, learning and shiurim.  The Chief Rabbi was closely followed by other leaders who instructed all Shul’s to close their doors and avoid direct contact.  Meade Hill immediately set up many groups and forums to reach out and keep the kehila strong.  We were able to re-open our doors for Shabbos 4th July 2020 albeit with social distancing.

In 2020, Shul membership rose to over 300 for the first time which re-inforces the hard work that the trustees and staff have put in to growing the Shul.

The Shul is looking forward to offering many new services over the coming months and years to cater for the increasing number of Jews moving into the area.